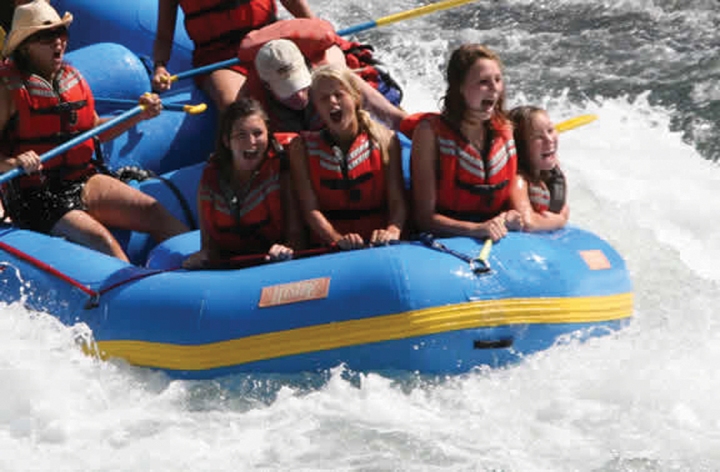 Living on an island, I was fortunate to have an amazing array of water sports to choose from as a child. After all, being brought up on the Coral Coast of the exotic Fiji Islands has its advantages and amongst a host of watersports like surfing, sailing and canoeing, people from our town and visitors enjoyed river rafting as well. It may not be as dramatic as the Futaleufu River’s Terminador rapids but still provided an exciting experience.

Naturally, finding out more about the Futaleufu River brought back a host of childhood memories. Heard surging from a quarter of a mile away, the Class V stretch of white water at Futaleufu cascades over and around imposing granite boulders for eight-tenths of a mile, and it lives up to its name.

The river, which runs more than 120 miles through Chile, drops 3,000 feet from beginning to end, and through its most challenging section of rapids, the Futaleufu drops 45 feet per mile, which is 33 feet more per mile than the Colorado River when it passes through the Grand Canyon.

In Patagonia, which emerged as a world-class white-water destination a little less than three decades ago, the Futaleufu is the ultimate crown jewel. A group of kayakers first negotiated the Futaleufu rapids in 1986, and the following year a commercial rafting company from the United States attempted the Terminador and other rapids along the river.

Outfitted with a traditional rafting boat full of gear and rafters without paddles, the American company successfully traversed a handful of Class V rapids before reaching the stretch of white water that, based on the impending result, would come to be named Terminador.

The rapid offers no margin for error, and the raft, weighed down by rafters who couldn’t addle, drifted from the necessary line down the left side of the river. Instead, it was pulled down the center of the rapid, where it was trapped (and subsequently destroyed) in a large, violent hole, the section of a rapid below a submerged boulder where the resulting waterfall creates a backward-falling wave of equal strength.

All of the rafters survived, but news of the event quickly circulated throughout the international rafting community, and for years the Futaleufu was deemed unraftable. It wasn’t until 1991 that Eric Hertz and his company, Earth River Expedition decided to explore the possibilities.

With 20 years of rafting experience and supported by his fleet of specially designed rafts and catarafts (a cross between a catamaran and a traditional white-water raft that offers greater stability through rapids and better rescuing ability), Hertz and a small team of guides spent a couple of years in the early ‘90s making exploratory runs of the river. Initially, Hertz would allow only accomplished rafters with Class V experience to join him on those explorations, although today, 90 percent of Earth River’s clients are beginners.

The classification of white water is not an exact science and rapids can change classes with the rise and fall of a river’s water level. Nevertheless, as a general rule, a Class V rapid is considered the most extreme white water that can be rafted commercially. In addition to being difficult, it can be treacherous.

With the Mundaca, another famous class V rapid, there is the danger of being swept up in the current that slings everything toward a giant hole near the bottom of the rapid – a hole so large that the backward – crashing wave downriver is as high as the initial drop before it. A hole of this magnitude will flip a raft instantly.

Regardless of the rapids faced, what everyone discovers after a full day of rafting the Futaleufu is the river’s uniqueness. The river is fed by the melting glaciers in the Andres Mountains some 8,000 feet above sea level, but because those glacial waters filter through a series of high-evaluation lakes they’re about 20 degrees warmer when they reach the canyon where the river’s rapids begin to form.

Those high-elevation lakes also allow the silt to separate from the water, which makes the Futaleufu clearer than most glacier-fed rivers and gives it a Caribbean-like turquoise hue. According to Hertz, even the canyon’s geology contributes to a unique rafting experience.

The Futaleufu may be unique, but like most high-volume rivers, it’s in danger of losing its identity. From the beginning of Earth River’s involvement in Patagonia, rumors circulated about damming the Futaleufu for hydroelectric power, which is why Hertz bought land at strategic points along the river.

This allowed him to build distinct campsites, each with its own ambience, and it allowed him to block the damming of river at those specific areas. Hertz was careful to take a minimalist approach. He cut down a few trees and made sure every riverbank dwelling was concealed from view along the water.

All four of Earth River’s campsites are different. They range from a sprawling property with communal area recessed into caves, lost beaches, and natural springs to a treehouse community where guests can drift off to sleep while listening to a cacophony of frogs croaking in the nearby lake. Wooden and stone hot tubs are mainstays at every campsite, as are flush toilets and hot showers, but guest expecting luxurious accommodations with white-linen service will be disappointed.

The luxury of an Earth River trip is that novice paddlers can find peace of mind knowing that their guides can lead them down a river famous for its world-class white water.