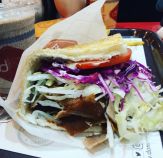 Street food is my comfort food so when I recently went to Doner Deli with a couple of friends to indulge in some great Street food and was pleasantly surprised with the choice, taste and ambience of the restaurant.

The dishes are perfected by the founders Hazem Elgendy and Mustafa Alrefaie who love Doner and travelling and hence visited Turkey, Greece, Lebanon and Germany for inspiration before coming up with their own Doner recipe with innovative preparation methods.

I loved the combination of the Kebabs in Pita Bread with the creamy potato salad. The sliders were good too but I saved some space for the delicious brownies. The potato salad was a perfect side dish to accompany the kebabs.

The kebab in Pita bread is the real deal…it must be the sauce, which is tangy, but with a garlic kick in it that just enhances the taste of the meal. The sliders were good but I would have sneaked more of the sauce from the kebab. Brownies were the melt in your mouth kind so we naturally left the place on a high note.

For the drinks I went with lemon mint, which was not too sour or sweet, hence just right to make it refreshing in between. I sneaked a sip of the Oreo Shake from my companion and it was pretty decadent. Good for her but not good for my waistline hence I opted for the lighter drinks.

It was easy to get seats and while waiting for the food, I looked at the large artwork done in chalk on the wall. It creates a warm ambience and gives it a trendier look.

Certainly a place to go back for more with an extra dash of the Doner Deli magic sauce and definitely a lot more brownies.

There are 4 branches of Doner Deli in Dubai and two in Abu Dhabi.